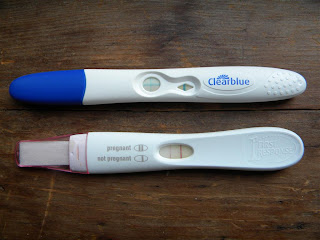 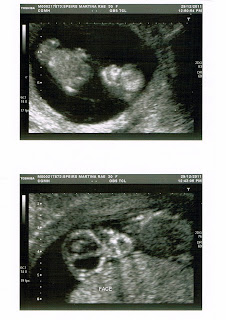 You see where I'm going with this right?
Yes, it's true.  We're having another baby!  And no, it's not because we wanted a girl.  I'm already sick of the girl comments.  When we decided to add another child to our family, what we really wanted was a healthy baby.  Just thought I'd get that out of the way first off!
So we will soon be parents to 3 instead of 2.  Are we crazy?  Perhaps!  Sometimes I wonder how I can handle 3 when the 2 I have are handful enough.  I don't look forward to the early months, the sleep deprivation (I am not going to pretend I think this new baby will sleep through the night much before a year!), the constant feedings, the potential for another refluxy, colicky baby, or any of the other less glamorous things that come with having a tiny baby.
I see how much easier things have gotten with my boys after they passed the baby stage and I think, we must be crazy to go through all that again.
But it's just temporary, and we know this.  Whenever I would think about adding a new child to this family, thoughts of the baby and toddler days aren't all that would enter my mind.  I would think of 3 children, growing up together, having each other to play with, and looking out for each other.  I would think of the future, of all the love and joy each child brings to our family.  I would think of when they are adults, and have families of their own, and the big wonderful clan we are growing here.  It's not just about wanting to be pregnant, or wanting another little baby, or anything like that.  It's about wanting a family.
Tyler and I both come from families with two children.  No complaints from either of us there.  But whenever I would see my friends or cousins who had many siblings, there was something there that I just never had growing up.  There is a closeness between all of them, very special bonds.  My brother and I are very close and always have been, so I can only imagine how much more amazing it could be if there were even more of us in the mix.  Sometimes in life, your siblings are the people closest to you, who know you the best.
I am so excited to be starting on this new venture.  Am I scared of the lack of sleep that is inevitably going to be upon us?  Am I wondering about how I am going to wrangle 3 toddlers by myself when we are out and about at the park and playdates?  Am I slightly scared of all the whining, the fighting, the difficult times?  Of course I am!  But it is an adventure we are fully willing to take on, because having our children has been the best thing we have ever done, and I can't see how adding one more would be any less great.
The estimated due date for this bubs is still up for debate.  It should be around July 9th, but at the ultrasound I had today the tech put my EDD at July 2nd.  As much as I'd love to be a week ahead of what I thought, I think I will stick with the first date for now since it makes the most sense for me.  Not that due dates are set in stone, still it is nice to have a general idea of where I am at.
This pregnancy has been great so far, much like my other ones.  I am a very lucky pregnant lady, free of morning sickness, nausea, heartburn, digestive issues, or any of the other yucky aspects of being pregnant.  I haven't even been that tired through the first trimester and have managed to keep up with life as usual, whether that has meant chasing the kids around or hitting the gym.  I have felt great, and feel very fortunate that I can say that because I know so many ladies aren't so lucky with their pregnancies and don't get a chance to enjoy it the way I do.
The cat is out of the bag and the official announcements have been made.  We are the types of people who tend to stay hush hush for the first 12wks while we process everything and make sure it's on track.  I did tell my friends almost a month ago now as we had a girl's holiday night and they would have known anyway when I wasn't drinking.  For our families we saved the big announcement for Christmas as we thought that would be a fun time to share the news.
To announce it to our family I made the boys shirts that hinted about the new baby.  T's said 'Leader of the Pack', and F's said 'Monkey in the Middle'.  I thought they were clever and obvious enough, but not for everyone I guess as some people still needed to be told the news despite the shirts!  Everyone seems excited though which is great as I had been worried we'd get a whole lot of 'Really, a third?' sort of responses.  Here is a pic of the shirts (I wish I had one of the boys wearing them, but trying to get both to stay still together long enough for a picture is a near impossible task). 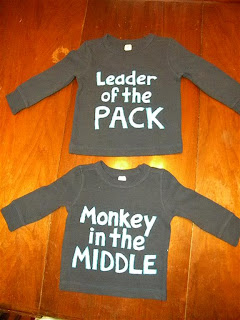 The boys don't know what is going on yet.  I haven't really felt the need to explain anything to T as it is still so early and July is so far away.  Kids don't have any conception of weeks or months so I'm worried that if I get him excited about the baby too soon, he'll start getting impatient.  F is still too young to understand I think, though we will start to explain more to him as time goes on and he gets older.
It's hard to believe though that when T was F's current age of 20mos, we were just about to have another baby.  It was tricky having them that close.  This time the age gap between F and the baby will be 26mos.  I'm still not sure though if that will be much easier!  Still, we are up for the challenge.
This baby is going to be a surprise.  We found out with both the boys what we were having as I was just too impatient and needed to know.  This time I don't feel I need to know, and since it is likely our last we have decided to go for the whole experience.  It doesn't matter to me what we have, though I know Tyler is kind of hoping for a girl!  In my mind, there is no point wishing for a boy or a girl.  It already is what it is, and we will love it all the same.
Needless to say this is very exciting news for us, and we are very happy about adding another to our clan.  We look forward to this next year, and all it has to bring.
Posted by MartinaS at 17:38