Foiled by the heat

On Tuesday we made our second attempt to discover more of Collingwood but it was not as successful as the previous one due to the sweltering heat.  Tuesday brought with it July like weather with hot temperatures and sticky humidity.  I still thought we'd go for a wander down by the water and it would hopefully be cooler.
We walked to go check out the Harbourfront trails.  While T doesn't seem to be bothered by really hot temperatures, it soon became apparent that F was not enjoying himself.  After about 15mins of wandering I saw that he was getting redder by the minute so decided to throw T back in the stroller and trek back home.  Ugh, it was so hot.
I did discover the Collingwood Arboretum though.  I knew there was one but didn't realize where it was and was pleasantly surprised to have stumbled upon it.  We will have to go back sometime with Tyler to get a better look at the trees and shrubs.  I managed to snap a few pictures. 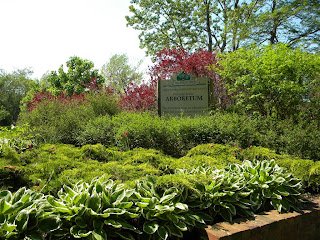 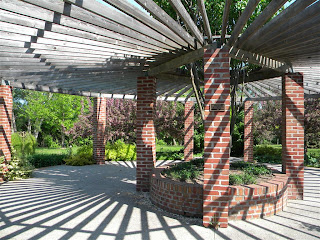 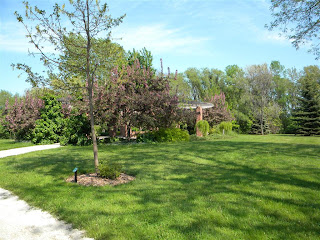 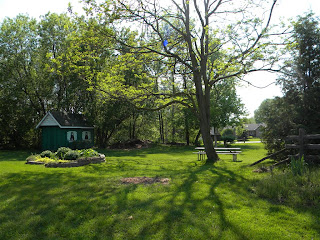 And in true Canada form, two days later and it is cold again.  The sun is still shining at least, but the temperature has dropped probably at least 10 degrees since Tuesday.  I was sweating buckets and now I am freezing.  Go figure.
T is like me, he likes the heat and has no problem spending time outside in hot weather.  As soon as the sun hits him his skin turns a beautiful golden colour.  Both of us already have tan lines just from that one day, even though he was lathered up with sunscreen.
F on the other hand is like Tyler and does not like to be hot.  He gets very grumpy and sweats profusely.  Poor guy turns pink, just like daddy.
Tuesday was a reminder of what the middle of summer is like here, so hot that you often can't spend a lot of time outside safely.  So now that it is cool and comfortable again we better make the most of it before the sticky summer weather is upon us for good and we are forced to seek refuge in air conditioned buildings.
Posted by MartinaS at 10:54