So our town is home to the Collingwood Elvis Festival.  Maybe one of the largest Elvis Festivals in the world, I don't know.  In any event, it's a big deal around here.  Every summer people come from all over to experience all things Elvis.  There are Elvises (Elvi?) in virtually all shapes, sizes, genders, and ages.  You could say our town is overrun by Elvis!  Concerts, contests, impersonators galore.
Last year during the Elvis Festival we had just moved in, so didn't get a chance to go out and experience it.  This year we were away for a wedding in Toronto, but made it back in time to catch the tail end of the action on Sunday.  I imagine we missed most of the fun, there wasn't as much going on while we were out there, but we still got to see a few Elvises and avid fans. 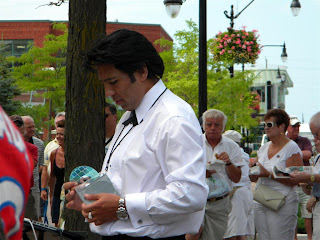 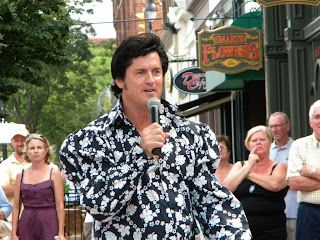 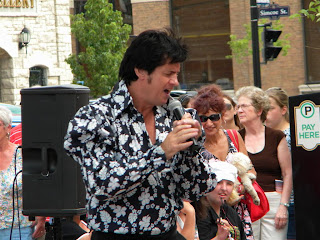 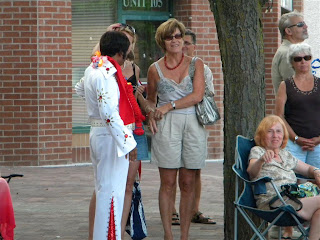 Some people think Elvis impersonators are weird or creepy.  Or maybe they think the whole idea of an Elvis Festival is cheesy.  I think it's pretty darn cool.  I mean, there is no denying that Elvis was kind of a big deal.  The man is a legend.
I like to watch the faces of the people who might have been fans of Elvis when he was alive.  Maybe the old woman walking down the street wearing an Elvis t-shirt was just a young girl or teenager when he was popular.  Maybe she had posters of him on her walls that she kissed before bed, or daydreamed that she would get to marry him.  Maybe she even saw him live in concert.  To her it is not just a cheesy festival, it is a part of her youth.  And for one weekend a year, she gets to relive a little bit of it.  I like thinking about those kinds of things.  Our generation may never have an icon like Elvis.  Most new music, while it is still great, is not legendary.  Everything is already been-there-done-that.  But Elvis, during his time, was groundbreaking.
I also love that all the shops on the main street do up their windows full of Elvis memorabilia and paraphernalia.  Vendors line the streets selling all things Elvis - t-shirts, purses, baby clothes, hats, sunglasses, leis, even fake sideburns.  Even the baby store had rock and roll sock monkeys and Elvis bibs and onesies. 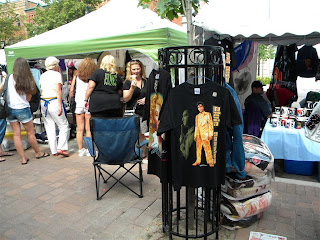 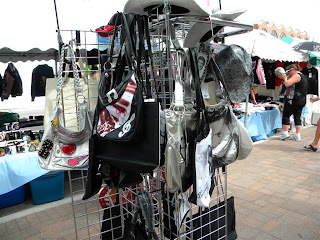 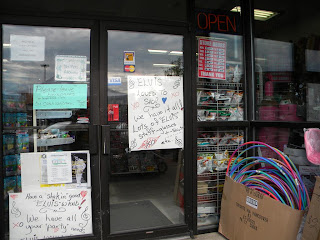 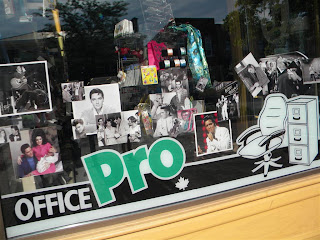 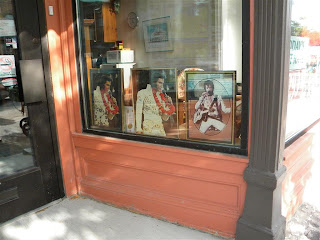 I wonder, how does one decide they want to be an Elvis impersonator anyway?
One thing is for sure, Elvis will live on.  And people of any age can enjoy the music he gave us.  I couldn't help but want to dance and sing along, and I noticed all sorts of people young and old, itching to do the same.
I think we missed all the really good Elvises this year since we were so late getting out there.  Next year I plan to get out and get the whole experience fully.  And I want to take pictures of as many Elvises as I can!  But for now I'll leave you with this one.  Didn't look that much like the real thing, but he was definitely enjoying his job. 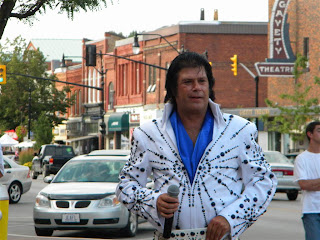 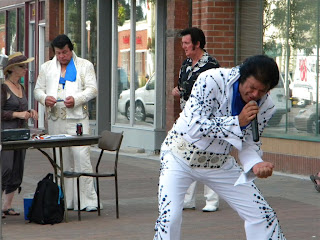 Until next year, Elvis has left the building!  (sorry, how could I resist?)
Posted by MartinaS at 10:26