We're not usually big celebrators of Easter.  We do make a point of visiting with family, but never make a big deal over egg hunts or gifts.  Up until now T wasn't really at an age where I thought he was interested in hunting for eggs.  This year was no exception, I really hadn't planned on much originally.  But then earlier this week it dawned on me that he probably really would like to do an Easter egg hunt, seeing as how much he enjoyed decorating eggs!
When my mom was here on Wednesday we went to the store and she bought him a really nice basket with bunny ears.  Faced with a wall full of chocolate eggs, I felt overwhelmed at the fact that there really weren't any non-candy options.  I just couldn't face buying that much chocolate for my kids.  In the end I managed to find a pack of eggs that contained stickers, and another pack that contained candy (which I figured I could somehow sneak out of the eggs at some point as he didn't have to know there was candy in there!).  I'm not a totally crazy mom who doesn't let my kids have any sugar, it's just on holidays it seems like we're expected to let them have an awful lot.
Today though I started thinking I was a little nuts, and I should have at least picked up some chocolate eggs so that he had more fun stuff to hunt for.  I realized that we really didn't have a lot (only about 14 eggs or so).  Tyler went out and hid the eggs in the yard, and then we brought the kids out.  I wasn't sure if T was really going to get the idea, but it didn't take him long to catch on!  Soon enough he was racing around, giggling in excitement trying to find all his eggs.
We knew it wouldn't take him long to find them all, so as he was scurrying around Tyler kept sneaking up behind him and snatching a few eggs from his basket and re-hiding them around the yard.  It was genius!  We were able to prolong the egg hunt for much longer and we all had such a great time!
Today brought back the memories of hunting for eggs when I was a child, memories that I had long since forgotten.  Now I'm really excited to do this in future years, and I promise next year I will buy enough eggs!
A few pics of the day (wish I had snapped some better ones, but oh well!) 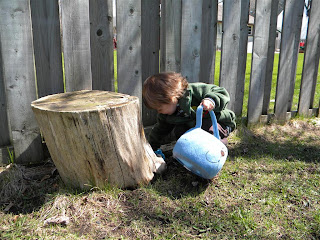 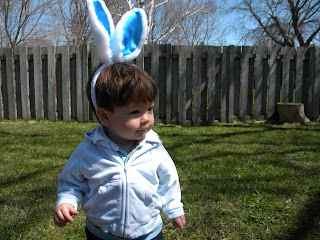 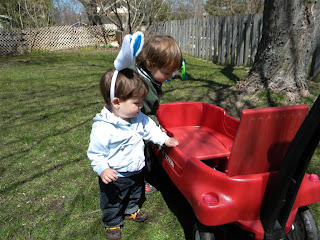 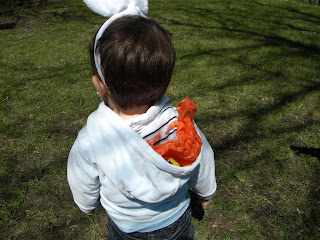 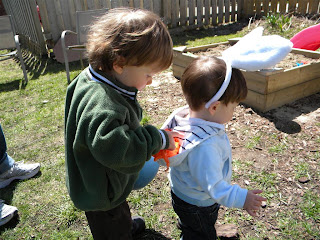 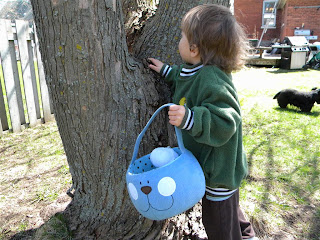 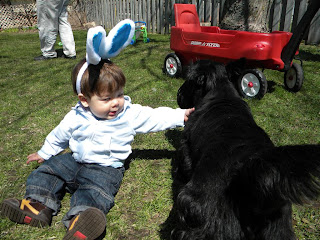