I miss horsebackriding.  It's funny, because I think this is the first time since I stopped almsot 4yrs ago that I really, truly miss it.  Of course I miss my Mav man, I think about him all the time and his quirky quarterhorse face.  But I actually miss riding too.
I started riding when I was about 13yrs old.  When I was 15 my parents bought me my first horse, Teddy, and I competed with him for 2yrs.  In 1998 I got Maverick, my black appendix quarterhorse.  He was 3.5yrs when I got him and we spent many years together.  I pretty much taught him everything he knew and he taught me a thing or two as well.  We had 5 wonderful seasons in the show ring.  Nothing fancy, just Trillium circuit hunter and equitation classes, but it was a blast and I loved every minute with him.
Even long after I stopped showing I kept Mav.  I just couldn't let him go, even though he was costing me everything I had to keep.  I had it in my head that I would do what it took to keep him forever, and that he would still be waiting for me when I was ready to start riding again.  The reality was that I couldn't afford to give him the proper care.  So 2yrs ago I sold him.  I was fortunate enough that a friend of mine bought him, and I knew she would give him the best home.  Unfortunately though she had to sell her farm, but once again fate smiled down on us and the most wonderful couple bought him and they are his guardians.  He is retired now, but lives a wonderful life and is well taken care of.
Maverick will always be my baby.  He is 16yrs old now, hardly a young guy anymore.  But he has a heart of gold.  Anyone that has ever met him has been taken by him.  There never was a kinder, sweeter horse.  He gave me everything he had, carried me around the show ring and won us many awards.
It has been almost 4yrs since I was in the saddle.  4yrs in June.  Oh how I miss it!  It's one of those things that I'm really hoping I can get back into at some point.  I even went so far as to google stables in the area last night to see what is out there.  There's no way we can afford it now, it's so expensive.  But maybe in a few years it will be a possibility.
For the past few years while I have been busy with my kids, I've forgotten what life at the barn is like.  The sights, the smells, the people.  For so many years it was such a huge part of my life.  I would be at the farm 3-5 times a week, riding or hanging out.  I had so many friends there, my best friends.  Those were the days, hot days riding outside, and lazy summer evenings.  Getting up early to be at the showring.  The excitement, the nervousness.  It seems like a different time in a different world, sometimes I can't believe I was ever a part of it.
My memories are bittersweet as some of those bridges have been burned.  But here's hoping that I can build new ones out here in the future.  Who knows, maybe there will come a day when I can own my own horse again.  Maybe I will even compete.  Although I have my eyes set on dressage this time, no more jumping fences for me!
The man who bought Maverick keeps me up to date with how he is doing.  He is living quite far from us, probably about 2.5hrs.  But maybe this summer we can drive out to visit him.
One day, I will ride again!
A pic of Teddy, my first horse.  Never forgotten! 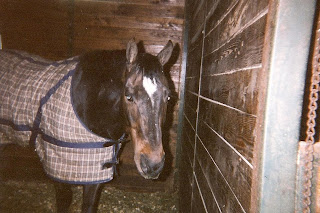 Some pics of Mav and I in action. 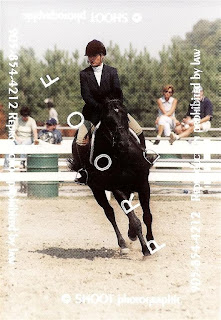 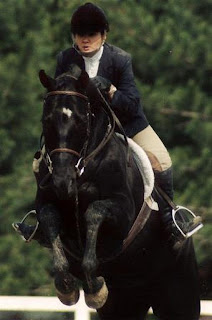 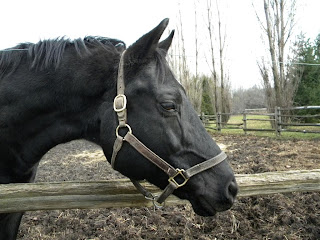